Several people contacted me wondering what I thought of the way agency is depicted throughout the movie Good Luck to You, Leo Grande, so I knew it was a must see. I’m also a big fan of Emma Thompson (who isn’t?) so… it was a no brainer.

The short of it:
I loved it. 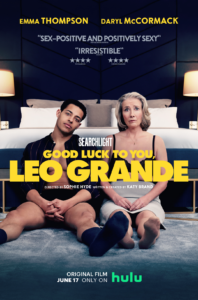 It is brave, it is poignant, it is real. I appreciate the way the film communicates the nuanced fears that arise when owning parts of one’s sexual self, and how it highlights the subtleties of pleasure. Two things, however, stood out to me the most.  First, they didn’t use my favorite word, which also happens to be the word that best sums up my life’s work thus far… agency. I know the word itself is catching wind but the concept is something I have been honing for decades and was shown from many angles throughout the film – it almost made me weep. Second, the film normalizes the broad spectrum of sex acts, of sexual interest and desire, and of the relevancy of a woman at in her 60s as a sexual being. Hallelujah! It is about damn time.

The final scenes are beyond delightful, they’re sexy and sweet, they’re relatable to anyone at any age and they’re just absolutely lovely. God bless the screenwriter, Katy Brand – she got it right in so many ways. 10 out of 10.

I felt so seen and the effects are still lingering. The movie is a gold-bedazzled billboard for the work I do with so many people around the world. THIS is how people feel after holistic sexuality gets a hold of them, THIS is how I want everyone to feel whether they work with me privately or through a course, THIS is why I am so adamant that people take the time to know themselves sexually. It is beyond worth it.

Her enthusiasm in the “I feel invincible” scene made me want to stand up and give an ovation. THAT is agency. I get a lot of grief and judgment for the work I do and because my work is confidential, not a lot of people talk about it to others or go on social media and tell them how their life has changed due to our work. But I get to see it, day in and day out, and that is part of the beauty and honor of my work. I get to see the transition people make as they not only find out who they are as a sexual being, but who they are period.

*Spoiler alert as I am getting into the nitty gritty of this charming AND powerful movie. Please still watch it!*

Let’s talk about the obvious stuff:

I am in support – hell yes! I have close personal and client relationships with several sex workers and can attest that this happens and a lot of the dialogue is realistic and authentic. I love that this character did this for herself and, yes, a lot of sex workers do the work they do for the reasons he said – again, watch the movie.

Now let’s move on to the deeper stuff. 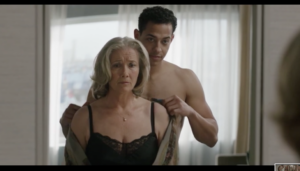 Nancy (Emma Thompson) is a retired widow who hires a good looking young sex worker called Leo (Daryl McCormack).  It had been a few years since she had had sex and even then, her sex wasn’t inspiring, fulfilling or frankly, good. She had an interest, a desire, a yearning to try some things, to figure out if sex was really worth it anymore, and to see what, if any, pleasure awaited her. She was skeptical, curious, awkward,  hopeful and scared… sound familiar?

I fell in love with her instantly.

She’s a bit prickly, she has some interesting things to say about her kids and life, and is  both direct and subtle. You guessed it… they have sex. And then they meet again. They talk more. Have more sex. She crosses his boundaries later in the movie which backfires on her but leads to a big breakthrough. It ends so beautifully in my eyes and we all are given a brief glimpse into Nancy’s imperfect, beautiful, holistic sexual inner and outer work.

She’s human, normal, and relatable. I know many will watch and think her choices are anything but relatable and maybe even extreme, dangerous, and / or audacious amongst a million other things. And yet here is where the magic lies – agency, the part of being human that is both a mother fucker and true salvation. Acknowledging and standing strong in your belief that pleasure is your birthright, and then seeking and experiencing sexuality on your own terms is agency… and it’s so much more.

Nancy’s choices and the details of her journey may or may not align with yours but her human experience does. Sexuality is something we all have in common.

I work with people of all ages seeking support, information, healing, and a desire to open up to new ideas about sexuality. I love them all but I am particularly drawn to the increasing number of women who follow my work and work with me that are in their 50’s and beyond (maybe because I fit into this category at last). I feel determined to break down this societal idea that women’s aging is both a crime and a push for us to be invisible.

The women I talk to want to be seen as sexual beings. They want to feel connected to who they are as a sexual being. They want to reconnect, to define themselves on their own terms, to have partners who can keep up – we are NOT done! These women also grieve who they used to be. They feel hope and excitement for who they have grown into. They don’t feel the age the calendar has given them and society has defined for them. They are thrilled to either know who they are with less concern for others opinions or feel ready to define life on their own terms finally.  “They” are also me. I feel all of this personally too.

I really love that this group is powerful, they are insightful as hell and are action oriented. This age group (again, whom I’m a part of) has seen so much in the world, in their lives and in our culture. And what speaks to my soul deeply is that this group gets inherently what I spend so much time teaching others — that knowing who you are as a sexual being and taking charge of this part of your life, changes your life or has the potential to. Inside your bedroom (if that’s where you have sex) of course but even more potently – outside of your bedroom, in your everyday life, minute to minute.

Agency is the foundation of my work. Sexual agency is the highlight of my work. I have been both researching and teaching for almost 20 years. I will touch briefly on it but hope you will be inspired to learn more about it and learn what it feels like when applied to your life. It is becoming a buzzword now but like many buzzwords, I believe it’s misunderstood in everyday conversations and I will continue to research and teach what I know so agency can truly shine! Check out a podcast I’ve done about agency, one of my courses (REVEALED or Agency REVEALED) or an article I’ve read if you want to dig into it.

In short, agency is a noun, verb, concept and skill. The skill has 5 parts to it, rooted in the complexity of making a decision and then living with it. I was thrilled when I watched these steps play out in a real way in the film.

And yes, Nancy is the headliner in this movie but I don’t want you to overlook Leo. He’s more interesting than what meets the eye and could easily get overlooked because of  Emma’s brilliant delivery and Katy’s excellent writing of Nancy. Nancy is compelling, but Leo has a lot to offer as well.

I’d like to recount some of the places where agency comes through for Leo:

And here are some places where agency comes up for Nancy:

I could write much more but end with this litany of points:

And these several salient themes:

After watching this movie, I want you to leave with this. YOU get to define your sexuality on YOUR terms. Fuck what society and your old messaging and politics and whatever… has told you. What do YOU want?  Please embrace pleasure as a wonderful connector in our life and find the parts of you that smile like she did in the ending series.

Her smile was about pleasure. Acceptance. Transformation. Imperfection. Knowing.

Go get it bitches.