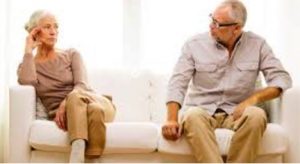 Weeks ago I asked my peeps what topics surrounding divorce they would like covered for my series. The amount of feedback was staggering and the wide range of topics would fill my writing docket for a year. I’ve tried to hit the most commonly requested topics in this series and one topic popped up quite a bit which initially surprised me.

It shouldn’t though because it happens all the time.

When I had both reactions, I knew I had to write about it. Because we aren’t talking about this dynamic of divorce.

When your parents divorce when you are an adult.

I spoke to several people who experienced this dynamic and the level of devastation and isolation was deeply felt.

“I thought we had beaten the odds.  I felt embarrassed and was filled with disbelief.  And no one seemed to care that I was grieving the fact my parents were splitting after 45 years together.  It just didn’t make sense. I felt invisible and wondered if you had to be 15 years old in order for anyone to notice it is super painful at ANY age to see your family fall apart and to have to get used to separate holidays and houses.”

Another person told me what he didn’t think they could say out loud to his parents.

“Are you kidding me? You couldn’t just stick it out?  After 52 years NOW you are going to end it and live out the end of your life without each other? I was so mad they were doing this to the grandkids. To all of us really.  What were we going to do with the annual summer beach trip?  How do we split the holidays?  It felt selfish and the last thing we needed to deal with at this age. In an instant I felt the burden of who is going to take care of Mom financially and who is going to take care of Dad’s health issues? ”

If you have made it through adulthood with your parents’ marriage intact, the news of divorce will bring up lots of emotions, thoughts and situations. Some are similar to those who are children or young adults but there are also some unique aspects of the experience.

You will hear things about your parents from the other that you never wanted to know. This can be from the parent talking to you as a confidant or as a peer.  They may share bad or embarrassing habits/behavior of their ex spouse or reveal their own behavior.

“My dad started acting like a teenager.  He complained all the time about Mom and started going out to bars and talking to women who were too young for him. It was just weird. I didn’t recognize him.”

Even if you saw the unhappiness or wondered if they would be better off splitting up, by the time you reach adulthood, you may have felt pride and an ease that with the dysfunction dynamic and made peace that this was their choice, their life and their decision to stay together and thought it was a life long decision.

“ Of course I saw things between them that made me glad I didn’t have that going on in my marriage but I thought they were okay with it.  I didn’t realize it but when they told me, I immediately felt the loss of a sense of pride that my parents were still together. Not many can say that anymore.”

“ I felt immediate embarrassment. And didn’t want to tell anyone. A mid life crisis? COME ON.  Get over it and work it out. All the changes that me and my siblings/their spouses and all the grandkids were about to experience started flooding towards me. I thought we were never going to have to deal with that stuff since they made it that far.”

When you are older when your parents divorce, you may have already begun the shift of taking on some cares and responsibilities for your parents and the news of their divorce may make that need even greater.

“When Mom told us they were divorcing she came clean about how bad their finances were.  Little savings and no long term health care.  This news was crushing because I always assumed they had a plan that wouldn’t fall on me and my brother to bear. She looked terrified and I dreaded going home and telling my wife. ”

“Mom always took care of Dad’s diabetes issues. As soon as they told me and my brothers that they were divorcing, she told me she was no longer doing his doctor’s appointments and handed us his medication regime.  We looked at each other and thought, ‘How the hell are we going to take this on from a distance?’”

“I was sad of course but I kindof saw it coming. I knew they had been miserable for years.  It really hit me hard though when I told my kids.  They had friends who had parents divorce but never heard that grandparents do it too. My youngest asked ‘Are they allowed to do that?’. That was the only time I cried.”

“Both of them tried to hide their hurt from me. But I knew.  They were struggling but wouldn’t let me help them. My dad had no idea how to cook for himself and my mother didn’t know most of how the house stuff worked. If I had been a kid when this happened I don’t think I would have understood all of that and realized the huge amount of stress they were both under even thought they wanted this divorce.  That made me extra stressed.”

Since you are older you may be more aware and with your own opinion of who one of your parents’ being the ‘harmed’ party.  If that dynamic is at play, you may feel a keen sense of protection for that parent and a ton of resentment towards the ‘harming’ party.

“ I thought my dad was a dog. Left Mom at this age for a younger woman. So damn cliché. I didn’t talk to him for over a year and still barely talk to his new wife. I don’t do holidays with them and I don’t look at her like my step mom. I’ve been raised. I have a mom.  I didn’t ask for this and I can’t believe he did this to Mom when she was 65. Selfish prick.”

“ My dad is the sweetest guy on earth and did everything for my mom. I hope I can find a husband as good as my dad was to my mom.  My mom never appreciated him and just decided it was time for her ‘to put herself first’ and live on her own. I’m not sure when she didn’t put herself first.  Poor dad had no warning and is lost without her. She is angry I am not ‘empowering her’ with her choice but I hate it and sometimes I hate her.”

Parents may not realize that you have feelings too and feel hurt or devastated by their divorce ‘even though’ you are older.  It is a similar misunderstanding and underestimation when an adult loses their parent who is 80+ and people think “well at least they had a great, long life.”  It is a loss no matter what the age.

“When I see my friends divorcing, they put so much care into how and when to tell their kids and there is lots of talk about putting the kids first.  I was 30 when my folks divorced and there was none of that.  Seemed like no time was put into the when and how and they definitely put their own needs ahead of what I needed.”

You may still be dealing with the emotional stress and worry of the precipitating event if it was an illness or financial change and then the divorce hits and it is extra stress with no time inbetween for recovery.

“First it was her heart attack. Then I could feel a big shift in their relationship. Mom had a new lease on life and Dad wanted everything to go back to normal. It was terrifying to go through that and almost lose her and then right when things seemed to be normalizing, bam! He announces that he’s leaving Mom. It was too many hard life events happening in a row.”

“ Mom got cancer.  It was long and stressful and a very hard fight. Luckily she went into remission but when she had a recurrence, Dad announced that they were splitting.  I couldn’t understand it. How do you leave your wife with cancer?  Who is going to take care of her?  Who is going to be with her when she dies? Why couldn’t he have just waited?”

“I think everything started unraveling when my youngest sister left for school and Dad retired a few years after that.  He had no purpose and Mom was tired of him being underfoot and messing with her routine. They were super snippy.  They did nothing together.  They didn’t just grow a part they ran from each other. I didn’t recognize either of them and never wanted to come back home to visit. ”

No matter the age, divorce affects children.  Young, teenagers, mid twenties, forties. All ages needed support and most importantly need to be asked how they are doing, if they need more support and to now it is acknowledged that they are going through something emotional hard and draining too.

If you are a parent divorcing at an older age, remember your children need support too and if you have a friend, family member or spouse going through the experience of older parents going through divorce, please lend a shoulder and a tissue and be there for them. Hearts break at any age.