This election PROVES sexuality is an issue that NEEDS to be dealt with. Head on. This election shed a light on the polarities formed within and because of sexuality. This election confirms, we MUST look at sexuality from a different lens.   Of course some of this light troubles me, scares me and saddens me but not every part of this focus upsets me.

There is gratefulness as well. I’ll get to that later.

There is a lot of talk about hate, misogyny, oppression, and fear surrounding white men and this election. This talk is important. It is accurate.  It is emotional.  For some it is very very personal.

We can’t deny it exists. Who can? Things that have been said past and present are incredibly disgusting.  There are a lot of potential scary political decisions ahead and sexuality has been an underlying issue throughout all of this. Were you conscious of this presence? Were your aware of the pervasiveness of it?

We saw vast differences on sexually related topics this election.  Do not be afraid of the differences themselves. Knowing where you do not stand is as important as where you do. And knowing this about others is crucial as well. It is what we do with these differences and how we relate to opposing views and needs that matter.

It is why we must talk. We must debate. We must educate.

This election hit every aspect of sexuality I wrote about yesterday in my article “My Circles of Sexuality”. In most categories, multiple points are hit.

As a nation, we have been forced to think about these topics, talk about these subjects, listen to varying opinions about these matters and, for some, vote a certain way because of them.  The conversation hit a new level this election cycle.   This is a good thing.

Here is a small sampling of how sexuality was woven throughout this election at a unprecedented level:

Sexual Behaviors and Practices: Who is allowed to do what with whom and when. Bill’s formal sexual behavior and Hilary’s reaction to it.  Bill’s sexual history and Melania’s reaction to it.

Intimacy: Vulnerability and safety within conversations about sexuality and politics, trust and sharing within relationships that have common ideas and divergent ones. Did you share your stance on topics or keep that private? With whom did you share thoughts and asks questions? With whom did you avoid? Why? Is a mic on or off?  How do you respond when others speak about sexuality stuff to you- publically or privately?

Outside Influences: Our sexual culture, what your family thinks of these issues, how the world is reacting, what your work environment is sharing.

Desire: What is locker room talk? Boys being boys? Are there different rules for different segments of society’s sexual desires and how they can express them?

Values: Everyone was forced many times to think of what their values were on these matters. Everyone was faced with relationships where values conflicted. No one escaped this confusion. What mattered and where did each value fall on the each’s value continuum?

Love and Connection: We were asked to think about how we love and how we can love others. Connection was one of the most talked about concepts today. And perhaps one of the most elusive. How do we connect after such differences? How do we find love for one another as Americans?

Where is our commonality, connection and love when so many issues divide us?

Sexual Agency: Power. Who has power to make decisions? In your life? In legislation? Which voice/power/agency prevails? Do you have authority over yourself and your choices?

Sexual agency is the underpinning of every single sexuality issue and conflict in this election.

Our country “up leveled” the conversation on sexuality matters during the election. This does not mean the topics were “up leveled” only the amount, wide array and broad stroke of conversations about sexually related topics.

It doesn’t mean it was easy.   IT WAS NEEDED.

There were a lot of men who voiced support of women and women’s rights during this election. I lost track of how many personal friends or social media contacts wrote outrage about sexual issues or political opinions that did not reflect their opinions. Although I admit, I was personally grateful for the support, what I appreciated most was that this topic crossed gender lines. Passionately.

Men were offering support unsolicited.  Men were expressing support on their own.  Men were taking notice and wanting to engage in the discussion and set the record straight.

Men did this regardless of political affiliation and political policies. Men did it because they couldn’t stay silent.

I’ve been scouring history to see if this next statement is correct. I have not found anything contrary to it currently but am certainly open to correction if wrong….This election has galvanized gender about a female driven topic as strongly as women’s rights to vote and unlike anything since–not Roe vs. Wade, birth control, scientific research bias, or the wage gap. Perhaps that is due to the ease of social media but I think that is not the overarching difference. This difference  is important.

A caveat I must acknowledge is that most male support was in reference to their daughters or citing insult that men were being described negatively in a general summation. Not many mentioned the topics were insulting or dangerous for their wives or sisters or mothers…..but the protection and support and outrage was there. I’m curious why men didn’t speak to all women in this subject but I wonder if that is due to a different level or view of protection, innocence and duty towards children rather than older family members or peers. I’m sure if asked directly men would not say their protection was solely for children or their daughters but the absence is of note. I believe this can change too with awareness.

Throughout this election, from beautiful, amazing men I received text messages saying “I am ashamed and don’t know how I am going to tell my daughter”. I received FB messages asking me for advice on what to say to their daughters. I had phone calls telling me this is not how they feel or what they wanted. I received emails asking me to write about this topic or explain this other subject to them. I received a powerful one even today talking about how he wished he had spoken up sooner. I was stopped on the street, I was cornered at parties. I didn’t always agree with opinions but I was touched and inspired by the peaked interest and sparked opinions on so many matters previously untouched in every day interactions between men and women.

I saw a need to talk. I saw a hunger to share and to question.

These conversations weren’t always clear or concise and clunky would probably be the best description. But they were happening and now that we are here, they cannot stop.

We are no longer red and blue states on the map. We need to come together. We need to work towards a common good. Common ground. We are not blue and red we are purple. And we need to be conscious of the moments where sexuality intersects with politics, policies, personal and private.

So what is next? 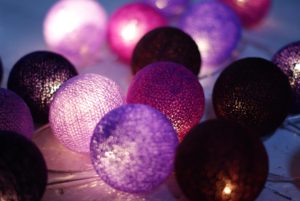